What can we do for you?

If you are looking for a price competitive, quality-oriented supplier to manufacture your parts to your specifications, then contact us now, at:

We look forward to hearing from you! 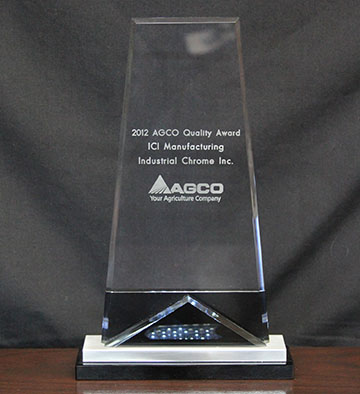 In August, 2012, ICI received the AGCO Quality Award from AGCO Corporation, during their North American Supplier event held in Jackson, MN. Suppliers from many North American countries attended this exclusive event, which included a tour of the new AGCO plant, new factory, product demonstrations, and an award presentation for outstanding suppliers that excelled in 3 key areas: Collaboration, Innovation, and Quality.

AGCO challenges all suppliers to adapt their continuous improvement processes in order to acheive a PPM rating of less than 1000. ICI, the only manufacturing supplier of the three recipients, received the AGCO Quality Award for having a PPM rating of 150! AGCO also commended ICI for having 98.7% on-time delivery.